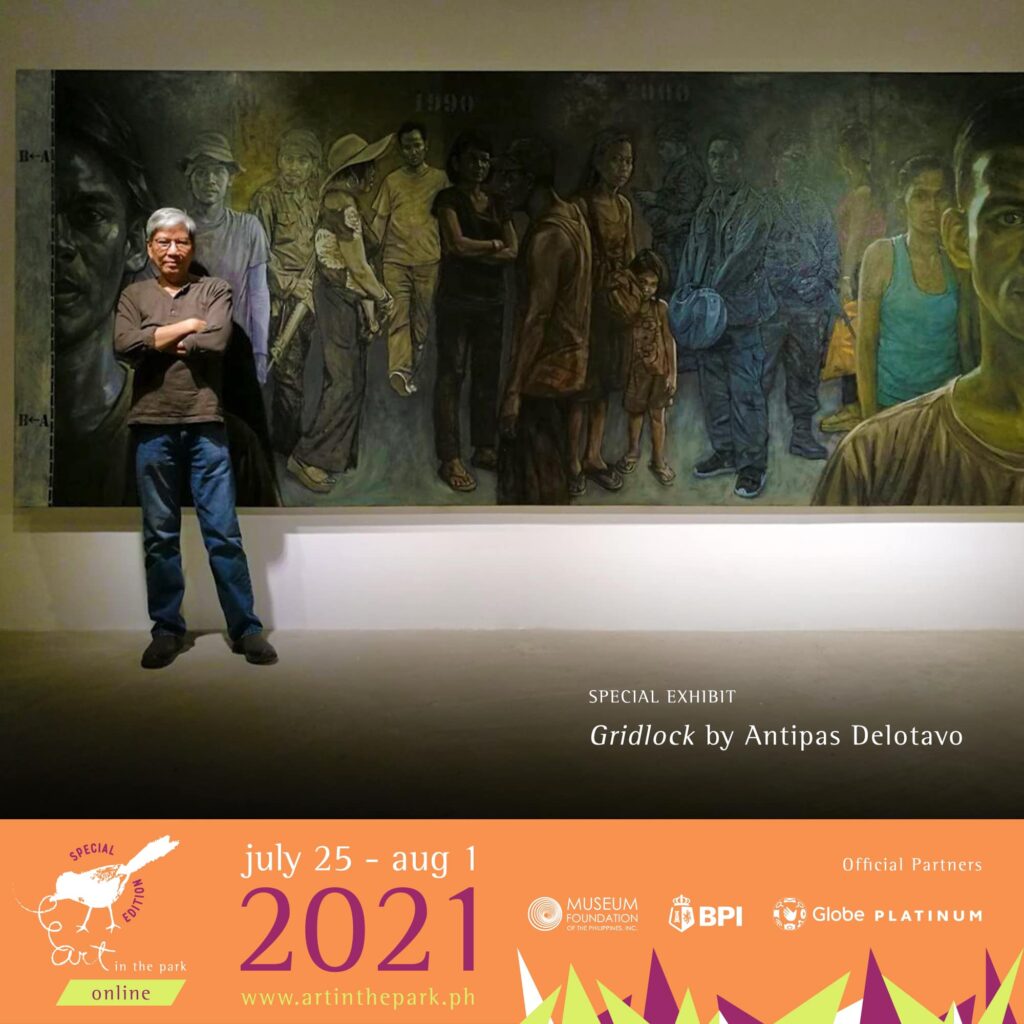 Antipas Delotavo has been conferred with recognition in the Thirteen Artists Award (1990), Garbo sa Bisaya of VIVA EXCON (2012), and the Araw ng Maynila Patnubay ng Sining sa Pintura of the City of Manila (2005), among several other awards. He has also been a recipient of the French Government and the British Council’s travel grants. He has been part of numerous exhibitions, both in the Philippines and abroad.

Gridlock, for Art in the Park Online 2021 is recognizably painted by visual artist Antipas Delotavo. An abundance of stuff gather around figures of common folk in Delotavo’s most recent artworks which are apparent in his over four-decade career. A collage approach that tends to present disharmony shows meticulous visual detail. Drawn out of his commitment to the study of this sector of nameless citizens that contribute to the nation, these seven new paintings continue his fascination of these characters that appear still — motionless as painted but also aloof and lost in thought.

The faces are familiar whether it be a mother and child or a lone man and yet there are forms previously unfamiliar as the artist contemplates these current conditions. Rather than disputing and resenting the contradictions of living and survival, the works bring into question the accessories of today and its social effects. This intention becomes more vivid in delineating between the center and the corner that draw the eye through colors to the margins — the brightly painted objects submerged by the textured background. By placing the spotlight on these, reality is imagined through the contradiction of consumption. Through close exploration of these, the characteristics of this time permeate — flowers, face masks, and fruits. Objects of immediate need and objects that have shaped the world around are suspended in hopeful anticipation.

Antipas Delotavo, (b. 1954) studied Fine Arts from the Philippine Women’s University. Delotavo has been conferred with recognition such as the Thirteen Artists grant (1990), the Araw ng Maynila Patnubay ng Sining sa Pintura of the City of Manila (2005), and Garbo sa Bisaya of the VIVA ExCon (2012). He has also been a recipient of the French Government and the British Council’s travel grants. Delotavo’s works are exhibited and collected in institutions both locally and internationally.